The aim is to encourage and recognise portable operation in Victoria's 45 National Parks, and the logging of contacts with those in the parks. The rules are available below include how to qualify for certificates, and the ultimate recognition of 'all parks plaques' that are issued.

A driving force behind this award which dates back to the 1970s is the late Keith Roget VK3YQ (sk), himself a portable operator, and notable figure in WIA Victoria and the federal arena. His widow, Jean agreed in the 1980s that it was fitting to rename the award in his memory.

Parks Victoria has assisted with this award and supports the Amateur Radio activity it brings to its parks. At all times please follow the guidelines and instructions of its staff. 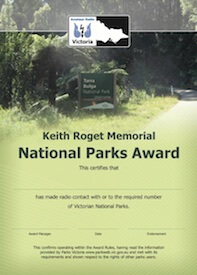 The Award started around 1970 as the Victorian National Parks Award. The driving force behind it was Keith Vidmore Roget VK3YQ (sk), on the WIA Victorian Division Council after serving in the RAAF during World War II.

Wanting to keep the ideals of the Award, his widow Jean agreed in the mid-1980s that it was fitting it be renamed in his memory as the Keith Roget Memorial National Parks Award.

Discussions were held with Parks Victoria which notified its regions and rangers that they may expect to see amateur radio activity in National Parks. 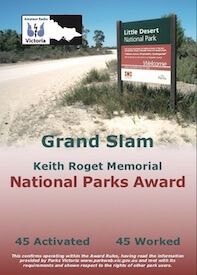 Roger Baker VK3BKR was made its custodian. The Award was further revamped in September 2008, covering Victoria's 40 National Parks with the manager being Chris Brennan VK3QB. Thank you to both for their efforts.

In 2009 Tony Hambling VK3VTH showed plenty of interest in portable operations using his station, and soon took on the position of Award Manager. One of his first major tasks was to promote the award.

It proved to be a huge success for the Centenary Year of 2011, and an activation weekend has been held in November each year ever since. In April 2014 saw the introduction recognition plaques those who work to, and from, ‘all parks’.

The basic award will be issued where the following criteria are satisfied:

A ‘Grand Slam’ plaque also to those who are eligible by both working from, and to, all National Parks - in other words have activated 45 and worked others in 45 parks. Grand Slam 45/45 National Parks

A log extract or copy of the log showing all claimed contacts, Including National Parks activated or National Park worked including callsign, date, time, band, mode

For detailed road maps for each park visit Google maps. Parks Victoria www.parkweb.vic.gov.au has detailed information on each National Park. Research each park before visiting to assess local conditions and related activities

Please observe all rules and guidelines as published by Parks Victoria and respect the rights of other parks users.

Parks magazine reported on the KRMNPA in September 1987
Historic map showing some National Parks
Thanks to Warren Brown VK3BYD who provided us the historic articles.

This operating award has been initiated by Amateur Radio Victoria to encourage on air activity based on communicating with and between the 79 local government areas in the State of Victoria, Australia.

The start of local government in Victoria in 1841 occurred while it was one of the six British colonies, well in advance of the proclamation of the Federation of Australia as a Commonwealth in 1901. In the 1850s and 1860s, encouraged by generous subsidies, local government entities were established to provide local services, achieve community representation and to levy rates.

The 1980s saw strong concerns about the inefficiency of 210 local government areas, a new reform-driven state government, and an economic downturn, amalgamations of groups of them occurred resulting in a reduction to 79 today. 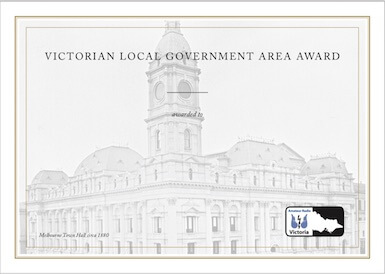 To qualify for the award the following contacts are required

An endorsement is available for those who achieve all 79 municipalities. Requests for mode, QSP or other endorsements should be referred to the Awards Manager.

A log extract or copy of the log showing all claimed contacts, station worked callsign, date, time, band, mode and each municipality by its name or number on the award list.

The award costs $5 to cover postage and costs.

Or via email: awards[at]amateurradio.com.au
At the Awards Manager discretion cross-checking and other validity checks will be carried out on award submissions.

Only PDF or TXT attachments are acceptable via email. 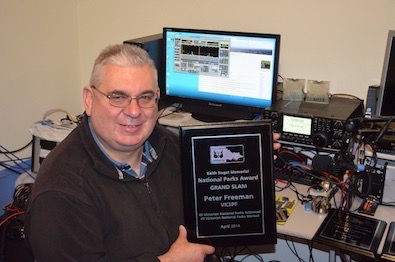 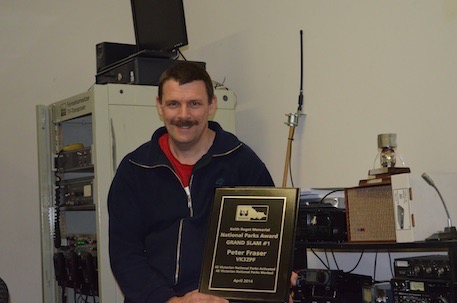 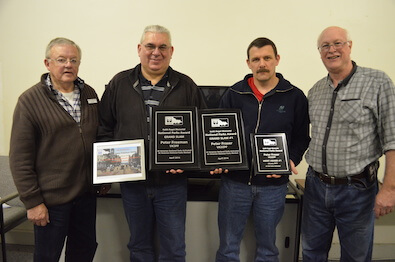